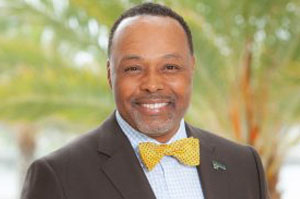 Driven by a passion for innovation and commitment to excellence, James Collins is honored to serve as a member of Governor John Carney’s Cabinet as Chief Information Officer (CIO) responsible for leading the Delaware Department of Technology and Information (DTI) to fulfill its mission of providing technology services and collaborative solutions.

Collins is a past president of the National Association of Chief Information Officers (NASCIO), and currently serves on the NASCIO Executive Committee. He also chairs the Technology Investment Council of Governor-appointed private sector and government (Executive, Legislative and Judicial branch) partners and is a member of a number of boards and committees involving public safety, health care, and education.

Appointed as CIO in October 2014 by then-Governor Jack Markell, Collins previously served as Markell’s Deputy Chief of Staff where his duties included acting as a legislative liaison and policy advisor on information technology. Preceding his appointment as Deputy Chief of Staff, Collins served as Deputy Secretary of State. In this role he was critical in expanding the state’s e-Government initiatives and use of information technology including the Delaware Prescription Monitoring Program and Veterans Services Directory. For a portion of his Department of State tenure, Collins served concurrently as Deputy and as Director of the Division of Professional Regulation.

Prior to joining the Delaware Department of State, Collins worked in the private sector as a senior consultant with Peregrine Systems, Inc. and MAXIMUS, Inc. where he implemented large-scale software projects for major clients such as the Pepsi Bottling Group, the United States Marine Corps, and the Massachusetts Bay Transit Authority.